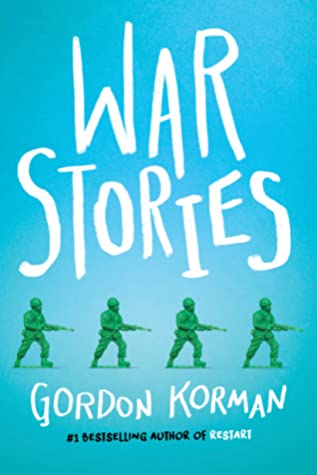 From the #1 New York Times bestselling author of Restart, a story of telling truth from lies -- and finding out what being a hero really means. There are two things Trevor loves more than anything else: playing war-based video games and his great-grandfather Jacob, who is a true-blue, bona fide war hero. At the height of the war, Jacob helped liberate a small French village, and was given a hero's welcome upon his return…

Gordon Korman has done it again, coming up with another great story. Super high-level plot: in “War Stories,” great-grandson, Trevor, and his dad, Daniel, accompany Trevor’s great-great-grandfather, Jacob Firestone (G.G.), to France. G.G. has been invited to France to be awarded a medal for his actions in WWII. G.G., who is quick to tell anyone and every one his war stories wants to recreate his war experiences for his great-grandson and grandson by going on the trip, starting with where he went to basic training, spent some time in England, invaded France on D-Day, and eventually, to the town he helped save from the Nazi’s.

Trevor, enthralled by his great-great grandfather’s feats learns that there is so much more to war than what he’s seen in his video games and movies about WWII, or even heard in his great-great grandfather’s tales. Along the way, the first-hand accounts offered by G.G. show Trevor there is no glamor in war. Trevor learns that not only are cities destroyed, but people as well.

Korman’s research pays off with an accurate “retelling” by G.G. of what war can be like, but suitable for younger readers. As an author of a more fictionalized book that deals with loss in WWII, I totally appreciate what he has written and would highly recommend this book for piquing students’ interest in a WWII lesson.