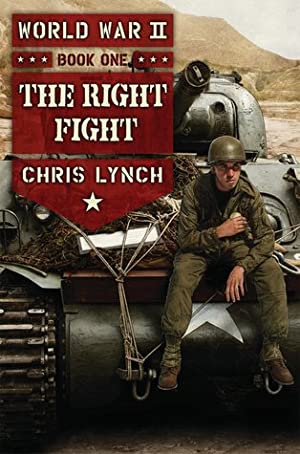 The author of the acclaimed Vietnam series sets his sights on World War II. There are few things Roman loves as much as baseball, but his country is at the top of the list. So when it looks like the United States will be swept up into World War II, he turns his back on baseball and joins the US Army. Roman doesn't mind. As it turns out, he is far more talented with a…

I’m glad I read Lynch’s “The Right Fight.” It is just right for Middle Schoolers (MG). Not because it’s such a great WWII story describing battle after battle. No, because it describes what’s going on in the mind of one young man, named Roman, who became a Sherman tank driver in Northern Africa. Lynch tells the story of friendships and brotherly bonds between men in the same predicament. He shows that although men were in the Army, sometimes those armies only consisted of a few men.

I recommend this book for those looking for the common worries, sights, and sounds of war that are not always included in war stories. This story pointed out that experience matters and how valuable it is to have for those who lead.

There is some death and loss in this story. It’s inevitable, but it is written in a poignant way. It also may educate the reader on how the early part of WWII was fought in the deserts of Northern Africa.